Venom is a form of toxin secreted by some animals (e.g. scorpion, bee, snake, etc.) for the purpose of defending or causing harm to another. Off course we all known that venom can harm and even kill humans. However in low enough doses, venom will not affect normal cells while it may affect cancer cells, since cancer cells are more sensitive to e.g. modulation of various channels much needed for the very fast cellular division. Once such substance with anti cancer potential is the cardiac glycoside Bufalin extracted from toad skin, discussed some time ago on this website: https://www.cancertreatmentsresearch.com/?p=472, which is inhibiting a relevant ion channel for cancer cells, i.e. the Sodium-Potassium exchange channel. Indeed, by now it is well accepted and scientifically demonstrated that venom from various animals contain various substances that have anticancer potential. 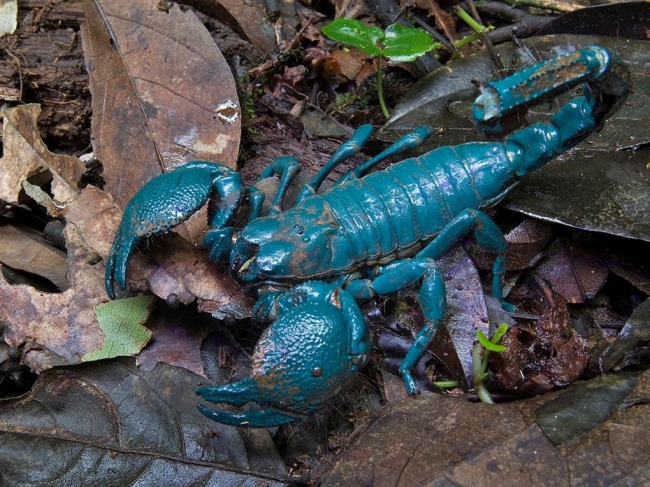 Diluted venom from blue scorpions, from Cuba, has been used to fight cancer for long time now by tens of thousands of patients. Though still in the research phase, many patients report that tumors have disappeared upon taking the venom. The web is full of anecdotal reports (such as this one) so I am not going to collect them here. Here is a website intended to start clustering the anecdotal reports http://www.escozul-testimonios.com/

I personally heard of people who had positive results while using scorpion venom and as we will discuss below there is good science to support the potential anti cancer effect. Like with all the substances, the source is important and that applies to scorpion venom as well. As it will be discussed below a bit more one of the most well known scorpion venom product is Vidatox which became available allover the world. However that may not be the best since it is highly diluted, i.e. homeopathic. So we need to pay specific attention to the source. As I will explain below, based on my personal experience, I trust Escozul from LifEscozul – so I am biased on that due to my positive experience with them (no paid advertisement or similar).

Here are some interesting links:
Bee, scorpion and snake venom may hold cancer cure
Scorpion Venom: Can It Really Cure What Ails You?
Scorpion venom is toxic to cancer cells
One Doctor’s Quest to Save People by Injecting Them With Scorpion Venom
Scorpion venom blocks bone loss

Kills cancer cells by ion modulation: A major anti cancer action of the scorpion venom is based on Chlorotoxin (CTX). This peptide found in the venom blocks small-conductance chloride channels that are highly relevant in some cancers for migration and invasion of the healthy cells. It has been shown that Chlorotoxin has the ability to interact with chloride channels in membrane protein in e.g. glioma cells, preventing transmembrane chloride fluxes (while that does not happen for the normal cells since chloride ion channel activity is abundant in malignant gliomas and absent in normal brain tissue). This selective activity in cancer cells suggests a potential treatment for cancer.

The effect of Chlorotoxin as a Cl− specific blocker has been intensively studied in brain cancer case (Ref). Nevertheless, following experiments it has been shown that CTX binds to cells of a wide variety of tumors, including prostate cancer, intestine cancer and sarcoma, suggesting wider application of this targeting agent against other forms of cancer.

Inhibits metastasis: Chlorotoxin can also bind to MMP-2 (Matrix metalloproteinase), a surface protein overexpressed in highly invasive tumors (Ref).  These MMP proteins are involved in the breakdown of extracellular matrix in normal physiological processes, such as embryonic development, reproduction and tissue remodeling, as well as in disease processes, such as arthritis and metastasis. When chlorotoxin binds to MMP-2, both get drawn into the cancerous cell reducing the expression of MMP-2. This has been shown for example in pancreatic cancer cells (Ref). Once CTX and MMP-2 are inside cancerous cell, they also inhibit the process that allows cells to change shape, which is required for the tumor cells to slip through the body and get to new locations (metastasis).

Here is a nice quote from a good article: “Olson and Gabikian found that the chlorotoxin didn’t attach just to brain tumors—it grabbed onto all sorts of cancers, from those that affect the skin to those that destroy the lungs. They also learned that the peptide could cross the barrier that protects the brain from toxins and other chemicals—a rare attribute for a molecule of its size, and one that Olson credits to the fact that scorpions have had millions of years to evolve methods to infiltrate their prey. This capability meant that the peptide could be administered intravenously rather than injected locally into the brain.” http://www.wired.com/2014/06/scorpion-venom/

Increases oxidative stress and supports Chemo to kill cancer cells: Chlorotoxin seems to also bind to and block annexin A2. Annexin A2 possesses redox sensitive cysteine helping the cancer cells to fight reactive oxygen species (ROS) upon oxidative stress. Indeed, it has been shown that ANXA2 depleted cancer cells showed enhanced cellular protein oxidation concomitant with decreased tumor growth compared to control cancer cells. [Reactive oxygen species (ROS) are oxygen-containing reactive chemical species which include molecules such as superoxide, nitric oxide, hydroxyl radical and hydrogen peroxide (H2O2).] Cancer cells typically express higher levels of ROS compared to normal cells which gives them both a proliferative advantage and also promotes malignant progression. However this high ROS level can also kill them if it is too high. In order to balance the proliferative advantage of ROS up-regulation versus its potential risks due to protein, lipid and DNA damage, cancer cells induce over-expression of ANXA2 to help lower the ROS when needed (Ref). Therefore, inhibiting or lowering ANXA2 will lead to ROS stress withing cancer cells. Most chemotherapeutic agents induce oxidative stress in cancer cells and this means that Chlorotoxin will help chemo with a further increase of the oxidative stress in cancer cells.

I am aware of three main sources of blue scorpion venom:

Based on the anecdotal reports, price, concentration of active components and communication with the producers, I am in favor of Escozul. Here is a page comparing Escozul with Vidatox, the relatively new product from Labiofam http://group-lifescozul.org/escozul-vidatox.html

As discussed in the “Mechanism” section, due to the way it acts, scorpion venom may help chemotherapy and other therapies that are pro oxidant (i.e. 3BP, etc.).

One of the synergies I am very excited to test is that with DCA (Dichloroacetate). Why? That is not only because DCA would be supported just because is a pro oxidant substance as described above. More importantly, it is because of the mechanisms described in the following article I came across recently which made me realize DCA and Scorion Venom may be a great combination: Chloride and other anions inhibit dichloroacetate-induced inactivation of human liver GSTZ1 in a haplotype-dependent manner. http://www.ncbi.nlm.nih.gov/pubmed/24632415. I guess the title says it all. The point of the article is that intra cellular Chlorine is making cancer cells insensitive to DCA and that reducing intra cellular Chlorine may make the cancer cells more sensitive to DCA. This means that the Chlorotoxin from the scorpion venom may make the cancer cells sensitive to DCA by inhibiting the Chlorine flow into the cells. This is an idea I am proud of 🙂

Chlorotoxin is a small 36 amino-acid peptide identified from the venom of the scorpion Leiurus quinquestriatus. Initially, chlorotoxin was used as a pharmacological tool to characterize chloride channels. While studying glioma-specific chloride currents, it was soon discovered that chlorotoxin possesses targeting properties towards cancer cells including glioma, melanoma, small cell lung carcinoma, neuroblastoma and medulloblastoma. The investigation of the mechanism of action of chlorotoxin has been challenging because its cell surface receptor target remains under questioning since two other receptors have been claimed besides chloride channels. Efforts on chlorotoxin-based applications focused on producing analogues helpful for glioma diagnosis, imaging and treatment. These efforts are welcome since gliomas are very aggressive brain cancers, close to impossible to cure with the current therapeutic arsenal. Among all the chlorotoxin-based strategies, the most promising one to enhance patient mean survival time appears to be the use of chlorotoxin as a targeting agent for the delivery of anti-tumor agents. Finally, the discovery of chlorotoxin has led to the screening of other scorpion venoms to identify chlorotoxin-like peptides. So far several new candidates have been identified. Only detailed research and clinical investigations will tell us if they share the same anti-tumor potential as chlorotoxin.

Brain tumors are fast proliferating and destructive within the brain microenvironment. Effective chemotherapeutic strategies are currently lacking which combat this deadly disease curatively. The glioma-specific chloride ion channel represents a specific target for therapy. Chlorotoxin (CTX), a peptide derived from scorpion venom, has been shown to be specific and efficacious in blocking glioma Cl− channel activity. Here, we report on two new derivatives (termed CA4 and CTX-23) designed and generated on the basis of the peptide sequence alignments of CTX and BmKCT. The novel peptides CA4 and CTX-23 are both effective in reducing glioma cell proliferation. In addition, CTX, CA4 and CTX-23 impact on cell migration and spheroid migration. These effects are accompanied by diminished cell extensions and increased nuclear sizes. Furthermore, we found that CA4 and CTX-23 are selective with low toxicity against primary neurons and astrocytes. In the ex vivo VOGiM, which maintain the entire brain tumor microenvironment, both CTX and CA4 display anti-tumor activity and reduce tumor volume. Hence, CTX and CA4 reveal anti-angiogenic properties with endothelial and angiogenic hotspots disrupting activities. These data report on the identification of two novel CTX derivatives with multiple anti-glioma properties including anti-angiogenesis.

Chlorotoxin (CTX) is a 36-amino acid peptide derived from Leiurus quinquestriatus (scorpion) venom, which inhibits low-conductance chloride channels in colonic epithelial cells. It has been reported that CTX also binds to matrix metalloproteinase-2 (MMP-2), membrane type-1 MMP, and tissue inhibitor of metalloproteinase-2, as well as CLC-3 chloride ion channels and other proteins. Pancreatic cancer cells require the activation of MMP-2 during invasion and migration. In this study, the fusion protein was generated by joining the CTX peptide to the amino terminus of the human IgG-Fc domain without a hinge domain, the monomeric form of chlorotoxin (M-CTX-Fc). The resulting fusion protein was then used to target pancreatic cancer cells (PANC-1) in vitro. M-CTX-Fc decreased MMP-2 release into the media of PANC-1 cells in a dose-dependent manner. M-CTX-Fc internalization into PANC-1 cells was observed. When the cells were treated with chlorpromazine (CPZ), the internalization of the fusion protein was reduced, implicating a clathrin-dependent internalization mechanism of M-CTX-Fc in PANC-1 cells. Furthermore, M-CTX-Fc clearly exhibited the inhibition of the migration depending on the concentration, but human IgG, as negative control of Fc, was not affected. The M-CTX-Fc may be an effective instrument for targeting pancreatic cancer.

43 thoughts on “Scorpion Venom: A Weapon to Fight Cancer”