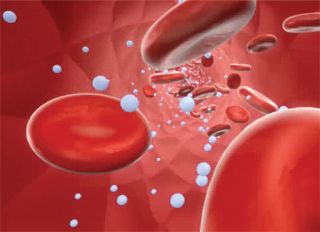 In an article published on May 25, 2016 in Science Translational Medicine, the researchers discuss how breast cancer cells are hunting for specific blood vessels that contain a molecule called E-selectin. (Ref.) This molecule exists in specific blood vessels in bone marrow and this is how cancer cells get there. Once they get there, they enter the tissue inside bones where are protected against therapies and usually lying dormant for years. This is how many years later, a patient can relapse.

This is a process characteristic not only to breast cancer but other cancers as well.

Now scientist are proposing two ways to work against these cells hidden in the bone marrow:

I was specifically triggered by this finding as I already investigated and discussed Plerixafor in a previous post (Ref.) due to its other anti cancer action, i.e. the inhibition of M2-macrophages.

For a discussion on the anti M2-macrophages effects of Plerixafor, including the way to obtain it and administration procedure, go to the following link https://www.cancertreatmentsresearch.com/?p=265

Interestingly, an E-selectin inhibitor, that is easy accessible is Cimetidine (Ref.). Cimetidine is a well known over the counter drug, a histamine H₂ receptor antagonist that inhibits stomach acid production. It is very safe, cheap and accessible and as a result it is given by most cancer clinics in Germany to thir cancer patients, as a anti metastasis drug, at a daily dose of 800mg/day.

The chemokine receptor CXCR4 belongs to the large superfamily of G protein-coupled receptors and has been identified to play a crucial role in a number of biological processes, including the trafficking and homeostasis of immune cells such as T lymphocytes. CXCR4 has also been found to be a prognostic marker in various types of cancer, including leukemia and breast cancer, and recent evidence has highlighted the role of CXCR4 in prostate cancer. Furthermore, CXCR4 expression is upregulated in cancer metastasis, leading to enhanced signaling. These observations suggest that CXCR4 is important for the progression of cancer. The CXCR4-CXCL12 (stromal cell-derived factor 1 (SDF-1)) axis has additionally been identified to have a role in normal stem cell homing. Interestingly, cancer stem cells also express CXCR4, indicating that the CXCR4-SDF-1 axis may direct the trafficking and metastasis of these cells to organs that express high levels of SDF-1, such as the lymph nodes, lungs, liver, and bone. http://www.ncbi.nlm.nih.gov/pubmed/20594270 http://www.springer.com/cda/content/document/cda_downloaddocument/9781603272667-c1.pdf?SGWID=0-0-45-734104-p173747353

When cancer cells express CXCR4, the receptor is still able to interact with CXCL12 (as in normal cells); this leads to cancerous cell retention in tissues that are rich in CXCL12 and facilitates the growth and spread of tumours. Recent studies have suggested that malignant cells use chemokine receptor/ligand interactions to home in on common metastatic sites like bone marrow and the lungs. In some cancers, over-expression of CXCR4 has been observed to lead to metastasis. Several independent studies have shown that cancer cells have higher levels of CXCR4 expression compared to normal cells . In breast and lung cancer in particular, over-expression of CXCR4 in patients led to a worse prognosis compared to those who did not over-express the molecule. CXCR4 is the predominant chemokine receptor in ovarian cancer and has also been implicated in many other cancers including prostate, colon, ovary and bladder. https://www.ebi.ac.uk/interpro/downloads/protein/prot_foc_11_02.pdf

CXCR4 expressions seems to also vary during the day, directly modulated by the typical daily cortisol variation: In humans, numbers of circulating native T cells strongly decline in the morning. This is mediated by cortisol increase, inducing a CXCR4 up-regulation with a subsequent extravasation of the cells. Metyrapone (a cortisol production inhibitor) completely blocked, the morning increase in CXCR4 expression on naive T cells. In parallel, both substances also hindered the decline in naive T-cell numbers with this effect, however, being less apparent after mifepristone. http://www.fasebj.org/content/28/1/67.full.pdf

CXCL12 signaling at CXCR4 is important in glioblastoma growth promotion as a migration-directing chemokine and as a mitosis-stimulating cytokine system. Recent developments in other areas of medicine may have made it now possible to comprehensively block glioblastoma’s use of CXCL12 signaling. CXCL12 signaling at CXCR4 requires an active intermediate conductance Ca2+-activated K+ channel to function. Plerixafor (AMD3100) is a new small molecular weight inhibitor of CXCR4, FDA approved to aid in stem cell mobilization. Inhibition of CXCR4 by plerixafor is expected to inhibit particularly the glioblastoma stem cell population by inhibiting that sub-population’s homing to the protective hypoxic niche. Histamine signals through the H1 receptor in glioblastoma cells to activate the intermediate conductance Ca2+-activated K+ channel also, thereby forming a potential bypass for inhibition of CXCR4-initiated signaling. The antidepressant mirtazapine is perhaps the most potent H1 antagonist in common clinical use. By inhibiting H1 stimulation of intermediate conductance Ca2+-activated K+ channels, it could prevent circumvention of CXCR4 inhibition by that path. The anti-fungal clotrimazole directly inhibits the intermediate conductance Ca2+- activated K+ channel at clinically achievable and well-tolerated doses. These three drugs used simultaneously are potential low morbidity paths to deeply inhibit CXCR4/CXCL12 signaling during cytotoxic glioblastoma treatment. Ref.

Dormant breast cancer micrometastases reside in specific bone marrow niches that regulate their transit to and from bone http://stm.sciencemag.org/content/8/340/340ra73

Breast cancer metastatic relapse can occur years after therapy, indicating that disseminated breast cancer cells (BCCs) have a prolonged dormant phase before becoming proliferative. A major site of disease dissemination and relapse is bone, although the critical signals that allow circulating BCCs to identify bone microvasculature, enter tissue, and tether to the microenvironment are poorly understood. Using real-time in vivo microscopy of bone marrow (BM) in a breast cancer xenograft model, we show that dormant and proliferating BCCs occupy distinct areas, with dormant BCCs predominantly found in E-selectin– and stromal cell–derived factor 1 (SDF-1)–rich perisinusoidal vascular regions. We use highly specific inhibitors of E-selectin and C-X-C chemokine receptor type 4 (CXCR4) (SDF-1 receptor) to demonstrate that E-selectin and SDF-1 orchestrate opposing roles in BCC trafficking. Whereas E-selectin interactions are critical for allowing BCC entry into the BM, the SDF-1/CXCR4 interaction anchors BCCs to the microenvironment, and its inhibition induces mobilization of dormant micrometastases into circulation. Homing studies with primary BCCs also demonstrate that E-selectin regulates their entry into bone through the sinusoidal niche, and immunohistochemical staining of patient BMs shows dormant micrometastatic disease adjacent to SDF-1+ vasculature. These findings shed light on how BCCs traffic within the host, and suggest that simultaneous blockade of CXCR4 and E-selectin in patients could molecularly excise dormant micrometastases from the protective BM environment, preventing their emergence as relapsed disease.