Scientists at the University Hospital and the DKFZ in Heidelberg, Germany have discovered that a protein from immune cells paralyzes the energy supply in tumor cells. The German Society of Pathology has awarded them with the Novartis Prize. The scientists have recently published their findings in Nature Communications. (Ref.) 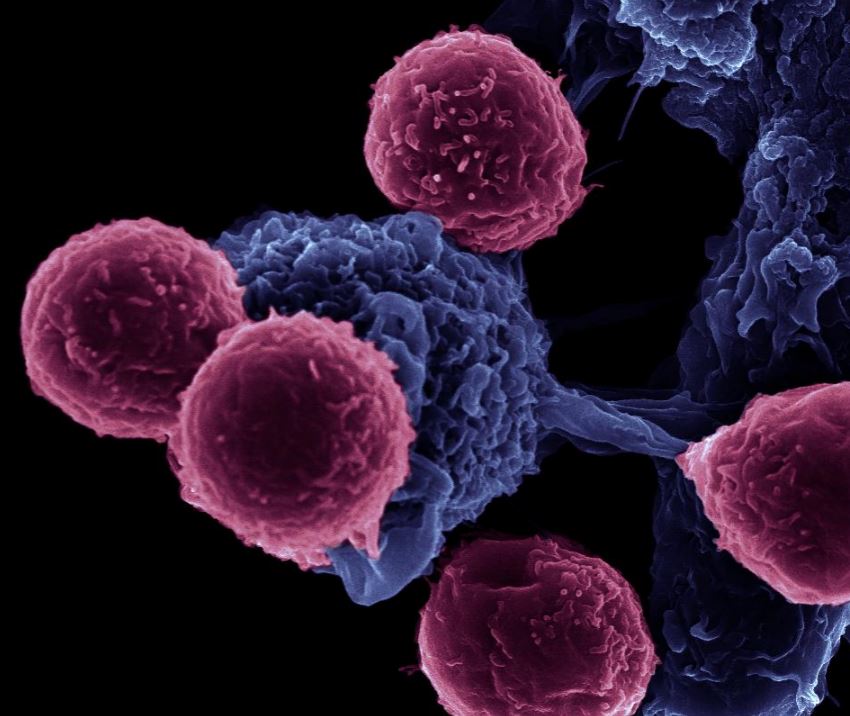 Natural killer cells “patrol” the body and are a type of cytotoxic lymphocyte critical to the innate immune system. When they encounter tumor cells, provided they recognize them as such, they inject them with a lethal protein cocktail. Besides other known lytic molecules secreted by NK cells such as proteases-like granzymes and perforins, in this toxic mix, pathologists have now identified the High Mobility Group Box 1 (HMGB1) protein as a highly effective natural agent against cancer. HMGB1 paralyzes a mechanism of energy production that is generally used by tumor cells, but not by healthy body cells. Tumor cells are killed within a few minutes. HMGB1 can also kill particularly aggressive cancer cells that are resistant to radiation and chemotherapy. This type of ‘cell murder’ by the immune system has so far been unknown. (Ref.)

The scientist have also found a way to produce HMGB1 by prompting killer cells from healthy blood donors to release the protein. They patented this technique and are  planning to lunch a start-up company in 2017. (Ref.). What is great about being able to produce HMGB1 outside the human body is that we would not have to wait for the immune system to recognize the tumors before releasing its weapons such as HMGB1 but instead administrate HMGB1 from external sources whenever a patient needs that.

OK, so why am I writing about this subject? As you know I am usually writing about a subject only when that can also be accessible to someone like us so that it can either be applied at home or in a clinic at an accessible cost. Fortunately, as I will write further, this may be the case here too. More specifically, we may be able to use substances that are safe and act against cancer cells via similar mechanisms as HMGB1 from Natural Killer cells.

In order to find substances that may act in a similar way as HMGB1 we first need to understand the mechanism behind HMGB1.

Fortunately, the scientists have also identified the anti cancer mechanism related to HMGB1: that is HMGB1 inhibits (a part of) pyruvate kinase M2 (PKM2). (Ref.)

PKM2 is a key enzyme responsible for channelling glucose flux to lactate for regeneration of energy or used for the synthesis of cell building blocks. It is well known that an intervention in the regulation mechanisms of the expression, activity and form of PKM2 has severe consequences for metabolism as well as proliferation and tumorigenic capacity of the cells which makes this enzyme a promising target for potential therapeutic approaches. (Ref.) Lowering PK activity is expected to produce less pyruvate or prevent complete conversion of glucose to pyruvate. This enables the upstream glycolytic intermediates to accumulate and thus contribute to the shift of metabolism towards the anabolic phase for amino acids, nucleotides, and lipid production. As a result, PKM2 may contribute to the adaptive response of cells to meet the needs for energy or synthesis of nucleotides, amino acids, and lipids.(Ref.).

PKM2, is not only about being expressed or not. When expressed, in cancer PKM2 can be also regulated between two types: a less active dimer and an active tetramer. These different forms of PKM2 regulate glucose metabolism through either the TCA cycle or glycolysis. It is believed that (a less active) PKM2 dimer drives aerobic glycolysis, while the active PKM2 tetramer produces pyruvate for oxidative phosphorylation.

In summary, PKM2 is critical in mediating aerobic glycolysis. If it is expresses it can be of two types, one which facilitates the move of glucose in to the mitochondria and the other type that facilitates the move of glucose towards conversion to lactate. If on the other hand PKM2 is inhibited, there is an accumulation of upstream glycolytic intermediates which finally are moving towards the anabolic phase for amino acids, nucleotides, and lipid production. For clarity on this process see Fig 1 in the following reference (Ref.).

Going back to what the German scientist found on HMGB1: they found that HMGB1 protein specifically inhibited the tetrameric form of PKM2. This lead to the accumulation of glucose intermediates upstream of PK. It was also demonstrated by scientists that cancer cells adapted to fermentation (anaerobic metabolism) are resistant to HMGB1 and in addition to that mitochondria may switch to glutamine usage, as there is no access to pyruvate with the inhibition of the tetrameric form of PKM2 by HMGB1. As a result, the authors propose that:

Reference for the last paragraph is the paper published as a Nature Communication article http://www.ncbi.nlm.nih.gov/pmc/articles/PMC4786644/

From the above what I learn is that:

The ideas that I get from the work of the German scientist is the following:

Note, that the release of HMGB1 by the immune system is not new (e.g. its role in sepsis is highly relevant (Ref.)) but this mode of action against cancer cells discussed above was not known.

While intending to conclude this post I came across some other very relevant facts: it is more and more accepted that when the immune cells are activated are switching to a fermentation mode (e.g. increased aerobic glycolysis contributes to the maturation of dendritic cells; M1 macrophages activation; T cell activation). It seems that elevated PKM2 expression in activated immune cells it the element that enables the metabolic switch from oxidative phosphorylation to aerobic glycolysis. One other relevant aspect is that hypoxia (HIF1α) interacts with PKM2 and through that upregulates glycolysis. This is the mechanism how, infection with bacteria may lead to hypoxia which in turn upregulates PKM2 and thus glycolisis. This over activates immune system and triggers the release of proinflammatory cytokines such as e.g. TNF-α and IL-1β and finally HMGB1. Finally, extracellular HMGB1 functions as a late mediator of lethal endotoxemia and sepsis. This is how lethal sepsis may be  produced in infected patients. (Ref.)

Why I find this story highly relevant is because

PKM2 inhibitors other than HMGB1:

Butyrate: Impact of butyrate on PKM2 and HSP90β expression in human colon tissues of different transformation stages: a comparison of gene and protein data http://link.springer.com/article/10.1007%2Fs12263-011-0254-6

This is a supplement commercially available at various online shops in the form of e.g. Sodium Butyrate.

This is a supplement commercially available at various online shops.

Shikonin one of the most potent and specific inhibitors to PKM2: Shikonin and its analogs inhibit cancer cell glycolysis by targeting tumor pyruvate kinase-M2 http://www.nature.com/onc/journal/v30/n42/abs/onc2011137a.html  Cell death induced by shikonin-class compounds was accompanied with a sharp reduction of cellular ATP. Note: since the authors in this article show that Shikonin inhibits glucose consumption and lactate production I conclude that Shikonin inhibits PKM2 dimer which is different than the inhibition of PKM2 tetramer by HMGB1 (which increases lactate production). (Ref.)

Shikonin has been used in clinical trials for 19 cases of later-stage lung cancer patients who were not the candidates for operation, radiotherapy and chemotherapy. The clinical observation showed that shikonin mixture could inhibit the growth of lung cancer and improve the immune function of the body. The tumors were reduced over 25% in diameter. The effective rate was 63.3%, remission rate 36.9%, survival rate of one year 47.3%. (Ref.) Shikonin anticancer effects may go beyond PKM2 inhibition (Ref.). Shikonin, is a natural naphthoquinone, used in traditional Chinese medicine for the treatment of different inflammatory diseases. I find Shikonin very relevant and once I will write a specific post on Shikonin only. Currently, I am searching for a good source on that.

Shikonin is a part of the TCM granules Zi Cao.

γ-Tocotrienol (a Vitamin E derivative) was Associated with a Suppression in Aerobic Glycolysis (Ref.) which suggests that it may be a PKM2 dimer inhibitor. It can be found as a supplement online, such as this one.

Upon serine deprivation, PKM2 activity is reduced, and pyruvate is diverted to a fuel-efficient mode in the mitochondria (Ref.)

Aerobic glycolysis is the dominant metabolic pathway utilized by cancer cells, owing to its ability to divert glucose metabolites from ATP production towards the synthesis of cellular building blocks (nucleotides, amino acids, and lipids) to meet the demands of proliferation. The M2 isoform of pyruvate kinase (PKM2) catalyzes the final and also a rate-limiting reaction in the glycolytic pathway. In the PK family, PKM2 is subjected to a complex regulation by both oncogenes and tumour suppressors, which allows for a fine-tone regulation of PKM2 activity. The less active form of PKM2 drives glucose through the route of aerobic glycolysis, while active PKM2 directs glucose towards oxidative metabolism. Additionally, PKM2 possesses protein tyrosine kinase activity and plays a role in modulating gene expression and thereby contributing to tumorigenesis. We will discuss our current understanding of PKM2’s regulation and its many contributions to tumorigenesis.

Shikonin, a natural naphthoquinone pigment isolated from Lithospermum erythrorhizon, has been reported to suppress growth of various cancer cells. This study was aimed to investigate whether this chemical could also inhibit cell growth of lung cancer cells and, if so, works via what molecular mechanism. To fulfill this, A549 lung cancer cells were treated with shikonin and then subjected to microscopic, biochemical, flow cytometric, and molecular analyses. Compared with the controls, shikonin significantly induced cell apoptosis and reduced proliferation in a dose-dependent manner. Specially, lower concentrations of shikonin (1-2.5 μg/mL) cause viability reduction; apoptosis and cellular senescence induction is associated with upregulated expressions of cell cycle- and apoptotic signaling-regulatory proteins, while higher concentrations (5-10 μg/mL) precipitate both apoptosis and necrosis. Treatment of cells with pifithrin-α, a specific inhibitor of p53, suppressed shikonin-induced apoptosis and premature senescence, suggesting the role of p53 in mediating the actions of shikonin on regulation of lung cancer cell proliferation. These results indicate the potential and dose-related cytotoxic actions of shikonin on A549 lung cancer cells via p53-mediated cell fate pathways and raise shikonin a promising adjuvant chemotherapeutic agent for treatment of lung cancer in clinical practice.

PKM2 and cancer: The function of PKM2 beyond glycolysis (Review) https://www.spandidos-publications.com/ol/11/3/1980

Metabolic reprogramming is a hallmark of cancer cells and is used by cancer cells for growth and survival. Pyruvate kinase muscle isozyme M2 (PKM2) is a limiting glycolytic enzyme that catalyzes the final step in glycolysis, which is key in tumor metabolism and growth. The present review discusses the expression and regulation of PKM2, and reports the dominant role that PKM2 plays in glycolysis to achieve the nutrient demands of cancer cell proliferation. In addition, the present study discusses the non‑metabolic function of PKM2, and its role as a coactivator and protein kinase, which contributes to tumorigenesis. Furthermore, conflicting studies concerning the role of PKM2 as a therapeutic target are reviewed. The improved understanding of PKM2 may provide a noval approach for cancer treatment.