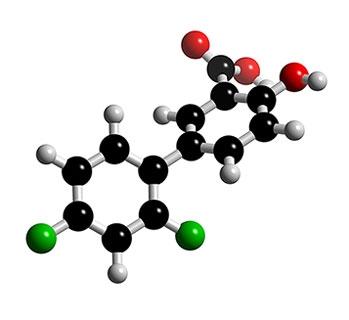 Diflunisal is a salicylic acid derivative (NSAID) and is available in 250 mg and 500 mg tablets. This is a drug similar to aspirin, already used on humans with various medical challenges but not cancer.

Its anti cancer effects have been discovered about 15-20 years ago by Prof. Dr. W. Kreutz, in Germany.
It has been claimed to be:
– Universal cancer therapy: the new cancer therapy works effectively on all solid tumors and metastases
– High selectivity: it acts exclusively on cancer cells
– free of side effects: due to the new target principle and the pH-sensitive active substances used are prevents side effects on normal tissue.
– triggering a pore formation in cancer cells
– All active substances are approved drugs for other diseases
– Good compatibility: The treatment is well tolerated by patients. The drugs are administered intravenously or orally
(Ref.)

There is only one place to my knowledge where this treatment is administrated in IV form to cancer patients. That place is Unifontis in Tunbingen, Germany. This clinic is lead by Prof. Joachim Drevs. I have seen one of his lectures and I was positively impressed. Here you can find a bit more info about the treatment.

Although the IV delivery seems to be preferred, this treatment can also be preformed with oral administration of Diflunisal as discussed below. I prefer the IV route since there may be gastrointestinal issues when administrating such a large amount of Difluinsal (and ASA) during a longer period of time.

Update on pilot study on antitumor efficacy of intravenously applied synergistic combinations of diflunisal, PAS, and aspirin in patients with advanced solid tumors.

The detection and characterisation of tumour-derived circulating epithelial tumor cells (CETCs) or circulating tumor cells (CTCs) have been a main focus of basic oncological research over previous years. Numerous studies in the past decade have shown that CTCs are a promising tool for the estimation of the risk for metastatic relapse. The present observational study describes treatment results using tumour imaging and the quantification of CTCs. A group of 14 patients with advanced carcinomas was followed during their anticancer treatments. CTC numbers were serially detected and treatment success was estimated by positron emission tomography-computed tomography. A connection was found between tumour remission and a decreasing CTC count in 83%, a connection between stable disease and stable CTC numbers in 78% and a connection between progressive disease (PD) and an increase in CTC count in 50% of cases. In the patients with PD, an incomplete response was observed affecting the CTCs, but not the solid region of the tumour. As a result of this study, it may be concluded that patients with solid tumours benefit from serial quantification of CTCs in addition to imaging, as this combination of techniques provides a more sensitive result than imaging alone.

I have met a men who went through the Diflunisal (or the so called “Diflu”) treatment. He had metastatic pancreatic cancer and was cured after about 3 weeks treatment with Diflu protocol. The man is from US and he wrote a message on a thread on the web. He even shared his e-mail address there so that anyone who likes can contact him and ask about his experience in Germany. The only big challenge is that the price he had to pay was in the range of 30k euro for the three weeks treatment ….

Essentially, the mechanism suggested is based on an interaction of the Diflunisal with the low pH that is found around the tumors. This means that the treatment will be relevant for the tumors that are visible on PET/CT only (which is the case for most cancers) and that the treatment will only be toxic to the tumor cells. Because the toxicity to the tumor cells is activated outside the tumor cell in the low pH environment, there is no chance for the tumor to develop resistance to the treatment. The results is the incorporation of the Diflunisal into the tumor membrane and the formation of a pore like structure that cause the collapse of membrane gradient, leading to cell death. (Ref.) It seems that when using a second salycilate, i.e. Aspirin (ASA) or PAS (p-amino-salicylic acid)  an anti-tuberculosis drug, a synergetic anti-cancer effect can be obtained (Ref.) It has been observed by prof. Krause that PAS and ASA acts on pH below 6.5 and Diflunisal on pH below 7 to induce the pore like formation. Note that the average pH of human blood is 7.36.

The discovery is protected by several patents (see below).

It has been suggested that the pore like structure induced by the salicylates treatment may be further supported by immuno therapies since in this case the immune system will be able to attack the cancer cells (prof Drevs).

At high concentrations, non-steroidal anti-inflammatory drugs (NSAIDs) can target a number of other cellular processes. For example, they can induce apoptosis independently of cyclooxygenase 1 (COX1) and COX2. Nitric oxide-releasing aspirin can inhibit 5-lipoxygenase, reducing the production of leukotrienes. Specific NSAIDs can activate peroxisome proliferator-activated (PPAR) subtypes Î±, Î³ and Î´. PPARÎ´ has been shown to interact with the adenomatosis polyposis coli (APC)€“Î²-catenin signalling pathway that is of particular relevance for colorectal carcinogenesis. NSAIDs also inhibit nuclear factor-ÎºB (NF-ÎºB) signalling. Finally, they can impact the release of prostaglandins from cells through the multidrug-resistance protein 4 (MRP4). (Ref.)

All drugs used are approved to be used on humans and their profile is similar to that of Aspirin.

May interact with Acetozolamide (Ref.)

If there is an overdose, NaBic solution IV will help to eliminate: http://c.ymcdn.com/sites/www.aavpt.org/resource/resmgr/imported/aspirin.pdf

Oral LD50 in rat, mouse, and rabbit is 392 mg/kg, 439 mg/kg, and 603 mg/kg, respectively. Symptoms of overdose include drowsiness, nausea, vomiting, diarrhea, hyperventilation, tachycardia, sweating, tinnitus, disorientation, stupor, and coma. The lowest dose without the presence of other medicines which caused death was 15 grams. (Ref.)

Acetylsalicylic acid reduces the excretion of uric acid at a low dosage. In patients at risk this may trigger a gout attack. Ref

Diflunisal, a fluorinated salicylate, exhibits analgesic, anti-inflammatory and antipyretic properties, and at high doses inhibits prostaglandin synthesis. It is well absorbed from the intestines and reaches peak plasma levels within 2-3 hours; steady state plasma levels are reached within 3-9 days on a regimen off 500 mg twice daily. Plasma Diflunisal is 99.83% protein bound and it is excreted mostly in the urine as a glucuronide. Diflunisal is generally better tolerated than aspirin and the most frequent adverse reactions are nausea, gastrointestinal discomfort and diarrhea. (Ref.)

Preparation of IV will be discussed latter.

The suggested administration protocol above is designed based on the (limited) info I have from people treated with Diflu and the published literature. Note that the patents published by prof. Krause suggest a bit different protocol:

“The most preferred dosage scheme is as follows (for a female patient with 65 ml blood per kg body weight, for other patients the dosage scheme can be adapted, if necessary):

Of course, other dosage schemes are also possible, if it is ensured that the interstitial Diflunisal concentration is as disclosed above. Instead of the above mentioned 3 hour intervals four hour, five hour or six hour intervals can be used or 12 hour intervals can be used with adapting the dosage which is given after each interval. The dosage for each interval can also be adapted depending on the patient and in particular on the amount of blood per kg bodyweight of this patient as explained above, and such variations and adaptations are within the knowledge of a skilled person.” (Ref.)

“A suitable combined oral and parenteral dosage scheme is:

Diflu can be ordered from western or Chinese chemical suppliers as powder. This should be used to prepare the IV according to the preparation method (to be indicated asap).
Alternatively, Diflu capsules can be found under the following names : Diflunisal, Artrodol, Diflusal, Fluniget, Artrodol, Dolocid, Donobid 250mg and 500mg.

Aspirin IV  can be found at German pharmacies 2.5g costs 47 euro, made by Bayer Vital GmbH

PAS IV can be found at German pharmacies and costs about 63 euro / vial, made by RIEMSER Pharma GmbH

Store at temperature between 15 and 30 degrees C

Salicylate and acetylsalicylic acid are potent and widely used anti-inflammatory drugs. They are thought to exert their therapeutic effects through multiple mechanisms, including the inhibition of cyclo-oxygenases, modulation of NF-κB activity, and direct activation of AMPK. However, the full spectrum of their activities is incompletely understood. Here we show that salicylate specifically inhibits CBP and p300 lysine acetyltransferase activity in vitro by direct competition with acetyl-Coenzyme A at the catalytic site. We used a chemical structure-similarity search to identify another anti-inflammatory drug, diflunisal, that inhibits p300 more potently than salicylate. At concentrations attainable in human plasma after oral administration, both salicylate and diflunisal blocked the acetylation of lysine residues on histone and non-histone proteins in cells. Finally, we found that diflunisal suppressed the growth of p300-dependent leukemia cell lines expressing AML1-ETO fusion protein in vitro and in vivo. These results highlight a novel epigenetic regulatory mechanism of action for salicylate and derivative drugs.