With this post I would like to highlight a cheap and accessible drug that I think it is good to be aware of, given its anti-cancer potential. Its name is Cyproheptadine, it is FDA approved, and in most countries is sold over the counter.

Before going further, if you find this post or other posts helpful at Cancer Treatments Research, please share them on Social Media platforms such as Facebook and Twitter. I specifically ask this because I see how constantly algorithms at Google and other search engines are creating a larger and larger gap between people and health related information in order to “protect” people. If like me, you also believe people should have access to science-based information, please share this. Also, in order to make sure we are connected you may want to register. And if you like me to continue doing this type of work, please support me somehow. Most easy way is to consider buying some of your food supplements at MCS Formulas, creating awareness about that, or donating to this website. But a thank you is also enough. This will help and motivate me to help you and cancer patinets to come. Thank you in advance for that, and I hope this helps!

A first-generation antihistaminic drug, Cyproheptadine (trade name: Periactin), was initially approved in 1961 for allergic conditions but its use has been expanded to include treatment of serotonin syndrome, serotonin-induced sexual dysfunction, insomnia, headaches. One of it’s side effects is increase of appetite, and this is why sometimes it is used as an appetite stimulant in cancer patients. Indeed, it has been observed to cause weight gain in observational studies of patients with advanced cancers. On the same line, Kinshasa population, Democratic Republic of Congo has been misusing the capabilities of Cyproheptadine as an appetite stimulating drug: It is sold to people who desire to gain weight, even without medical prescription, in order to have “roundness physical appearance” (Ref.).

It is both a histamine (H1 histamine receptors) and serotonin antagonist.

In laboratory studies it has been shown to be effective against:

Cyproheptadine seems to accumulate the most in bile and liver (Ref.). However, as we will see below, results were obtained beyond these organs, i.e. in the lungs.

Besides it’s anti-cancer potentials Cyproheptadine may be relevant to address Alzheimer’s disease (Ref.).

To keep things simple and because it’s anticancer mechanisms are not yet very well established, I will just sump to the facts.

Note that while there is not enough literature to establish the exact anticancer mechanism behind Cyproheptadine, note that histamine antagonists (both for H1 and H2 histamine receptors, such as Cimetidine. Loratadine, etc.) have been intensively studied during the past decade and have also been discussed on this website from time to time (e.g. here). accordingly, they are often associated with modulation of the immune cells, autophagy and metabolic modulation. So far, Cyproheptadine has been specifically associated to activation of P38 MAP kinase (Ref.) and Set7/9 (Ref.).

Unexpected remission of hepatocellular carcinoma (HCC) with lung metastasis to the combination therapy of thalidomide and cyproheptadine: report of two cases and a preliminary HCC cell line study https://www.ncbi.nlm.nih.gov/pmc/articles/PMC4543862/

This publication reports two cases of hepatocellular carcinoma (HCC) with lung metastases who were treated with a combination of thalidomide and cyproheptadine. The use of cyproheptadine in these two cases was originally for skin itching. Follow-up CT images revealed a complete remission of HCC (liver and lungs) in both of them after treatment for 6 months and 6 weeks, respectively:

Case 1: A 57-year-old man with no history of alcohol consumption with a  tumour measuring 3 cm in diameter near the dome of the right lobe of liver –  diagnosis of HCC. He underwent transarterial chemoembolisation for HCC on 3 December 2007. Four months later, abdominal CT performed on 16 April 2008 (figure 1A,B) revealed that the tumour size increased to 10 cm in diameter, with the presence of lung metastasis. Doctors start to him with thalidomide (50 mg once daily) for 14 days, followed by thalidomide (50 mg twice daily) for 67 days. At the same time, they prescribed cyproheptadine (4 mg thrice daily) for his skin itching. Eighty-one days later, thalidomide was discontinued because the patient could not afford it, but cyproheptadine was continued. Abdominal CT on 18 October 2008 revealed complete remission of the liver tumour and lung metastasis (figure 2A,B). 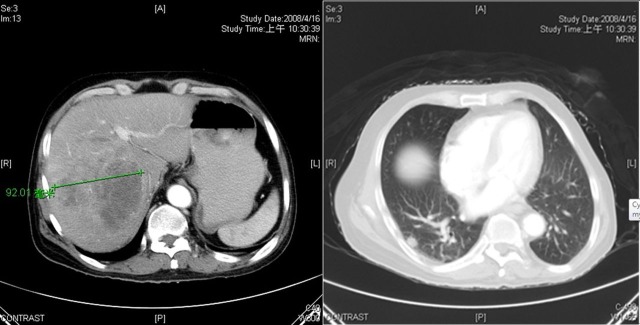 Figure: CT of case 1 on 16 April 2008. (A) Hepatocellular carcinoma approximately 10 cm in diameter with daughter nodules. (B) Metastasis in the right lung. (In fact, bilateral lung metastases were observed). (Ref.) 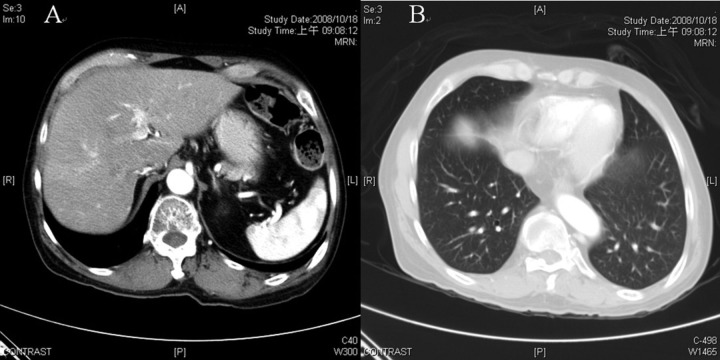 Figure: CT of case 1 on 18 October 2008. (A) Complete remission of large hepatocellular carcinoma. (B) Disappearance of lung metastasis. (Ref)

Case 2: A 63-year-old man with a large liver tumour about 17 cm in diameter resected on 3 November 2010 – diagnosis of HCC. The whole abdomen CT performed on 17 April 2011 revealed no obvious liver tumour recurrence. However, the chest CT performed on 17 April 2011 revealed bilateral lung metastases, and the serum AFP level was up to 30.2 ng/ml. Subsequent chest CT performed on 26 July 2011 revealed progression of lung metastases (figure 4). The patient underwent six chemotherapy cycles with epirubicin but the response was poor and his serum AFP level increased to 122 ng/ml on 21 November 2011. Later, doctors gave him the thalidomide (50 mg once daily) from 2 December 2011. Cyproheptadine (2 mg thrice daily) was also prescribed for skin itching. The serum AFP level on 13 January 2012 was decreased to 5.5 ng/ml and the follow-up chest CT performed on 19 January 2012 revealed that bilateral lung metastases totally disappeared (figure 5).

“An 80-year-old woman was hospitalized at Saint Barnabas Medical Center in October 1986 with a 9-month history of diarrhea, episodic flushing and 14 kg weight loss.  Her medications included digoxin, furosemide, and cimetidine. A computed axial tomographic (CT) scan of the liver revealed several areas of decreased attenuation consistent with metastases, the largest of which measured 8x 6 cm. Cyproheptadine, 4 mg three times daily, was started. The patient’s diarrhea and flushing disappeared, her appetite increased, and she gained 10 kg. A CT scan in January 1987 showed a decrease in size and number of hepatic metastases. The largest lesion now measured 5.0 X 3.5 cm.”

The authors conclude: “On the basis of clinical response of our patient to cyproheptadine and its low incidence of side effects, this drug should be considered for formal phase II trials in patients with carcinoid tumors. In addition, the combination of the H1 blocker, cyproheptadine, and the H2 blocker, cimetidine, should also be considered for further clinical investigation.”

A HCC patient treated with radiotherapy. The patinet obtained important tumor reduction. Only latter the doctors realized that Cyproheptadine has also been prescribed for alleviating skin itching and allergic rhinitis (2 mg by mouth Q12h; prescribed since the last 2 weeks of the RT course and then persistently used for 24 months) and that Cyproheptadine may be responsibel for the outstanding response.

Another positive case report has been publsihed at the end of 2021, many months after I wrote this post: “Efficacy of Cyproheptadine Monotherapy in Hepatocellular Carcinoma With Bone Metastasis: A Case Report” https://pubmed.ncbi.nlm.nih.gov/34745929/

Background: Hepatocellular carcinoma (HCC) is one of the most common causes of cancer-related deaths worldwide. Particularly, cases of bone metastasis have poorer prognoses.

Case presentation: A 62-year-old woman with suspected advanced HCC accompanied by bone metastasis with severe back pain and sciatica showed disease remission after cyproheptadine monotherapy. Initially, her serum alpha fetal protein (AFP) level was high, reaching up to 17697.62 ng/ml. A dose of 4 mg cyproheptadine, 3 times a day for 17 months was prescribed as the only treatment. Within 3 months, the serum AFP level gradually normalized down to 4.3 ng/ml. Both liver biopsy and bone biopsies were subsequently performed after 2 weeks of cyproheptadine. The results showed no malignancy. During the 34 months of follow-ups, the serum AFP remained normal in the range of 1.05 to 2.86 ng/ml. The patient has survived for 5 years without back pain and sciatica thus far.

Conclusions: This is the first report to investigate a successful clinical approach in cyproheptadine monotherapy for an advanced HCC patient with bone metastasis. We recommend cyproheptadine as a potential anti-HCC agent for the treatment of HCC with bone metastasis, but more related studies such as prospectively clinical trials, and ideally randomized trials are still needed.

Hepatocellular carcinoma (HCC) – A retrospective study conducted in Taiwan also demonstrated the anti-HCC effect of Cyproheptadine in 52 sorafenib-treated patients with advanced HCC (Ref.) Patients in the combination group (including Cyproheptadine) were 76% less likely to die and 82% less likely to have progression during the 17 months of follow-up. 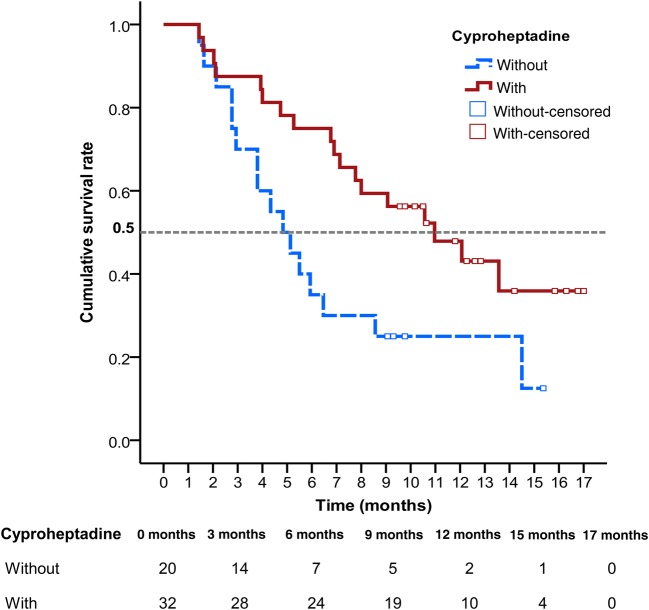 Bladder cancer: – A retrospective study conducted in Taiwan indiacates that the use of Cyproheptadine for more than 3 months has a significant effect on bladder cancer. (Ref.) 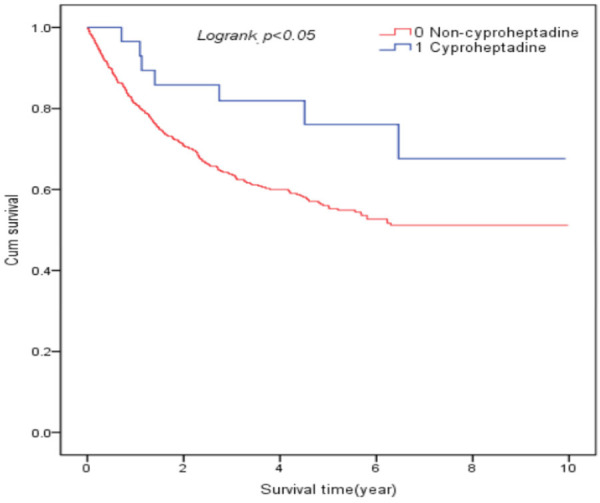 Side Effects and Toxicity

Potential toxicity: There are cases of cyproheptadine intoxications publsihed, associated with ingestions of cyproheptadine ranging from 0.3 to 6.5 mg/kg (Ref.). In these casee, patients presented some degree of manifestation of anticholinergic syndrome, including tachycardia, hyperthermia, decreased salivation and sweating, agitation, delirium, hallucinations (visual and tactile), mydriasis, and seizures. In such cases to reverse the symptoms treatment can include physostigmine, an acetylcholinesterase inhibitor, when necessary (Ref.).

According to the case reports and studies cited above, Cyproheptadine has been used for minimum 3 months continuously.

Given that some of the outstanding results have been obtained when Cyproheptadine was used in combo with Thalidomide, it could make sense to add that to the treatment strategy. Thalidomide has been discussed previsouly on this website here (Ref.).

In conclusion, Cyproheptadine is a very relevant tool in the fight against cancer such as carcinoid (neuroendocrine) tumors, liver tumors or other tumor types presenting liver metastasis.

In addition, as it modulates and down regulates Estrogen Receptor, it could represent a good repurposed drug to be added into a more comprehensive anticancer treatment cocktail to fight breast cancer. 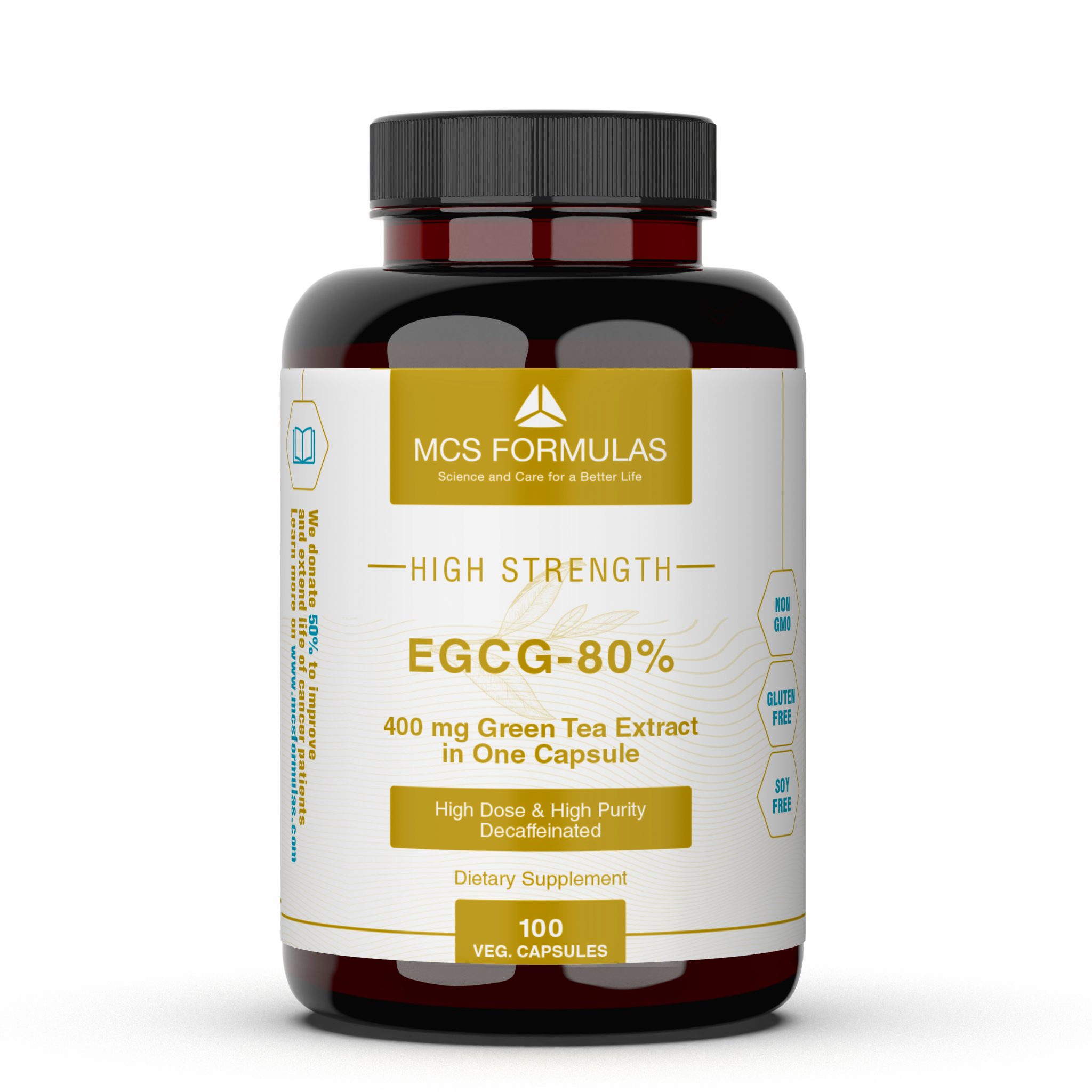 MCS Formulas is a food supplement company founded by members of Cancer Treatments Research community. It’s goal is to deliver value to the world in two major ways:

We ship all over the World via one of the fastest and most reliable express courier, FedEx. With this, the orders are tipically delivered in most places around in a few to several days.

SET domain containing lysine methyltransferase 7/9 (Set7/9), a histone lysine methyltransferase (HMT), also methylates non-histone proteins including estrogen receptor (ER) α. ERα methylation by Set7/9 stabilizes ERα and activates its transcriptional activities, which are involved in the carcinogenesis of breast cancer. We identified cyproheptadine, a clinically approved antiallergy drug, as a Set7/9 inhibitor in a high-throughput screen using a fluorogenic substrate-based HMT assay. Kinetic and X-ray crystallographic analyses revealed that cyproheptadine binds in the substrate-binding pocket of Set7/9 and inhibits its enzymatic activity by competing with the methyl group acceptor. Treatment of human breast cancer cells (MCF7 cells) with cyproheptadine decreased the expression and transcriptional activity of ERα, thereby inhibiting estrogen-dependent cell growth. Our findings suggest that cyproheptadine can be repurposed for breast cancer treatment or used as a starting point for the discovery of an anti-hormone breast cancer drug through lead optimization.