Background: In recent years, a large number of clinical and epidemiological studies have revealed the anti-cancer activity of propranolol in solid tumors, though the underline mechanism is yet to be clarified.

Methods: The proliferation of bladder cancer cells treated with propranolol was detected by MTS assays. In vivo tumor xenograft experiments were used to observe the effect of propranolol on bladder cancer growth in mice. The expression levels of Na+/H+ exchanger (NHE1) was measured by western blot. The frequency of CD8+ T cells and CD4+ T cells were detected via flow cytometry.

Results: In this study, propranolol inhibited the expression of NHE1 and sequentially led to a decrease of intracellular pH to 5.88 in MB49 cells and 6.85 in 5637 cells, thereafter, inhibited cell viability and induced apoptosis. Furthermore, propranolol inhibited the growth of bladder cancer in mice xenograft model. Flow cytometry found that the frequency of CD8+ T cells and CD4+ T cells in the spleen did not change compared with the control group, while the expression of IFN-γ, GZMB and T-bet secreted by CD8+ T cells increased respectively. Meantime, the expression of FoxP3 on CD4+ T cells decreased both in spleen and tumor tissue.

In order to analyze the anti-tumor immune response in vivo, an immunocompetent mice model, C57BL/6 male mice (Hunan Slack Jingda Experimental Animal Center), was used in this study. A total of 24 seven weeks old mice were injected subcutaneously into the right flank with 2×106 living MB49 cells in 100 µL medium without FBS. The sample size was decided according to the minimum requirement for statistical analysis. Tumor volume was measured 2 to 3 times/week and tumor volume calculated = W2×L/2 mm3. After tumor volume reached around 50 mm3, the mice were randomly divided into control and propranolol groups. The propranolol group divided into 10 mg/kg, 20 mg/kg, 30 mg/kg propranolol and gavaged every day. The dose of propranolol was determined according to our previous publication in colorectal cancer. The mice were raised in a SPF level experimental lab and sacrificed at the 19th day and tumors were removed for further analysis. The animal experiment protocol was approved by the Ethics Committee of Xiangya Hospital, Central South University and all experiments were completed with the approved guidelines of Xiangya Hospital, Central South University.

The therapeutic effect of propranolol on bladder cancer was assessed in MB49 tumor engrafted C57 mice. Once the tumor volume reached –50 mm3, mice were gavaged daily with propranolol for 10, 20, or 30 mg/kg. The mean tumor size on day 19 was significantly smaller in the three propranolol treated groups compared with treatment with vehicle alone (Control) Meantime, the tumor weight was also significantly decreased than control. However, there was neither tumor size nor tumor weight was significantly different between propranolol 20 mg/kg (or 1.62 mg/kg in human) and 30 mg/kg (or 2.43 mg/kg in human) group. There was no significant change in the body weight of the mice before and after propranolol treatment. Overall, these results indicated that propranolol can suppress the growth of bladder cancer without drug-limiting side effects.

The Na+/H+ exchanger (NHE1) is a ubiquitous membrane-bound enzyme involved in volume- and pH-regulation of vertebrate cells. It is inhibited by the non-specific diuretic drug amiloride and activated by a variety of signals including growth factors, mitogens, neurotransmitters, tumor promoters, and others.

Sodium–hydrogen antiporter 1 has been shown to interact with carbonic anhydrase II and calcineurin B homologous protein 1. It is also the target of the experimental drug rimeporide, which is being developed for the treatment of Duchenne muscular dystrophy.

We examined the ability of carbonic anhydrase II to bind to and affect the transport efficiency of the NHE1 isoform of the mammalian Na(+)/H(+) exchanger. The C-terminal region of NHE1 was expressed in Escherichia coli fused with an N-terminal glutathionine S-transferase or with a C-terminal polyhistidine tag. Using a microtiter plate binding assay we showed that the C-terminal region of NHE1 binds carbonic anhydrase II (CAII) and binding was stimulated by low pH and blocked by antibodies against the C-terminal of NHE1. The binding to NHE1 was confirmed by demonstrating protein-protein interaction using affinity blotting with CAII and immobilized NHE1 fusion proteins. CAII co-immunoprecipitated with NHE1 from CHO cells suggesting the proteins form a complex in vivo. In cells expressing CAII and NHE1, the H(+) transport rate was almost 2-fold greater than in cells expressing NHE1 alone. The CAII inhibitor acetazolamide significantly decreased the H(+) transport rate of NHE1 and transfection with a dominant negative CAII inhibited NHE1 activity. Phosphorylation of the C-terminal of NHE1 greatly increased the binding of CAII. Our study suggests that NHE1 transport efficiency is influenced by CAII, likely through a direct interaction at the C-terminal region. Regulation of NHE1 activity by phosphorylation could involve modulation of CAII binding.

Carbonic anhydrase II (CAII) is a metalloenzyme that catalyzes the reversible hydration/dehydration of CO2/HCO3−. In addition, CAII is attributed to other catalytic reactions, including esterase activity. Aspirin (acetyl-salicylic acid), an everyday over-the-counter drug, has both ester and carboxylic acid moieties. Recently, compounds with a carboxylic acid group have been shown to inhibit CAII. Hence, we hypothesized that Aspirin could act as a substrate for esterase activity, and the product salicylic acid (SA), an inhibitor of CAII. Here, we present the crystal structure of CAII in complex with SA, a product of CAII crystals pre-soaked with Aspirin, to 1.35Å resolution. In addition, we provide kinetic data to support the observation that CAII converts Aspirin to its deacetylated form, SA. This data may also explain the short half-life of Aspirin, with CAII so abundant in blood, and that Aspirin could act as a suicide inhibitor of CAII.

In biochemistry, suicide inhibition, also known as suicide inactivation or mechanism-based inhibition, is an irreversible form of enzyme inhibition that occurs when an enzyme binds a substrate analog and forms an irreversible complex with it through a covalent bond during the normal catalysis reaction. The inhibitor binds to the active site where it is modified by the enzyme to produce a reactive group that reacts irreversibly to form a stable inhibitor-enzyme complex. This usually uses a prosthetic group or a coenzyme, forming electrophilic alpha and beta unsaturated carbonyl compounds and imines. 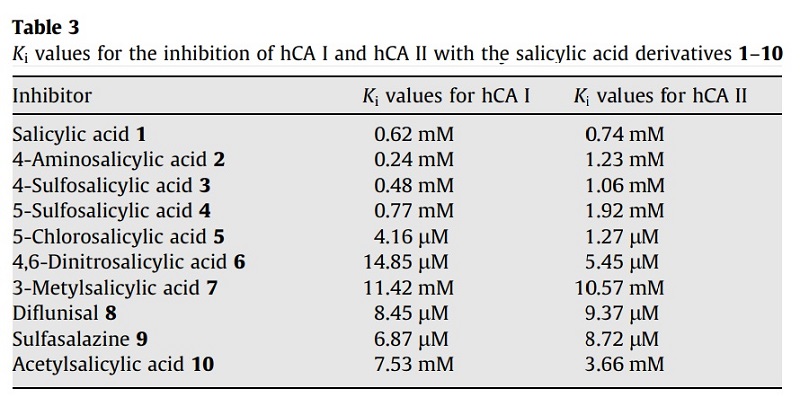 * Note that 3297 mg of aspirin are required to completely inhibit carbonic anhydrase II.

So, propranolol and aspirin may have synergistic effects.

Thanks for sharing the article.

1. Propranolol in general
2. its influence on Na+/H+ exchanger (NHE1) reported in this study

A post I dedicated to the relevance of Propranolol in cancer: https://www.cancertreatmentsresearch.com/propranolol-hexokinase-2-inhibiton-a-similar-anticancer-mechanism-as-that-of-3-bromopyruvate-3bp/

A post to help the reader understand the relevance of being able to modulate Na+/H+ exchanger (NHE1) https://www.cancertreatmentsresearch.com/ph-cancer-a-top-treatment-strategy/