Recently, with the help of a reader of this website (Thank you, Jose!), I came across a very relevant article, Immunotherapy in metastatic colorectal cancer for the first time utilizes the innate immune system, published on the website of the German Cancer Consortium (DKTK). 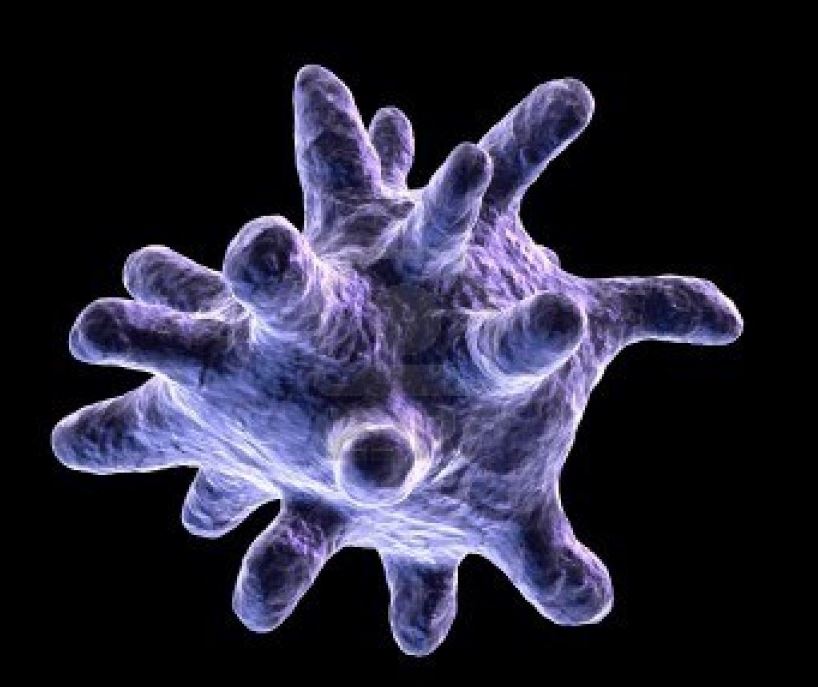 This article describes the results of a recent clinical trial running in Heidelberg, Germany using an anti HIV drug. (As a side note, we may remember that the first application of Salinomycin on humans was also done in Heidelberg.)

This phase I clinical study was conducted in 14 patients and was using the drug Maraviroc, an anti HIV drug known as a potent blocker of CCR5. While due to their mechanism CCR5 blockers are relevant to many cancer including that of blood, prostate, gastric, colon, breast, ovarian, etc. (Ref.), in this study the treatment was first applied on colorectal cancer patients with liver metastasis. Although I do not have yet the details of the study, the outcome of this study seems to be great as the scientists reported that following Maraviroc administration, the tumors in some of the patients disappeared. An example of a PET scan indicating the liver metastasis disappearance is included in this article (Ref.).

What is also great about these results is that are based on Maraviroc, a drug that has already received FDA approval for treatment of HIV and has shown little side effects and toxicities even on long term treatment in humans.  https://clinicaltrials.gov/ct2/show/NCT01736813

So what we have here is a drug that alone can lead to reactivation of the immune system in some of the cancer patients and as a result tumor eradication. Until now, the idea that CCR5 blockers can reactivate the immune system and kill cancer in humans was a theory only. But with the results from Hidelberg, this is now a fact. Maraviroc is FDA approved and the side effects are limited. The drug is administrated orally. As further discussed bellow, it can be bought at online pharmacies. The only drawback is that the cost is relatively high (2000 euro /month) but if used with other drugs such as Ketoconazole, the required dose will be half (Ref.) so the cost may be around 1000 euro/month.

Maraviroc blocks a microscopic doorway – the CCR5 receptor – which HIV uses to enter and infect human cells. This is why Maraviroc is highly relevant as an anti HIV drug.

In cancer, the relevant of CCR5 receptors is different:

The tumor microenvironment is composed of stromal and inflammatory cells that are recruited and/or locally induced to proliferate or differentiate by tumor cells or by normal cells “educated” by tumor cells. They communicate directly through cell-cell contact but also indirectly through paracrine signals predominantly constituted by cytokines and chemokines. (Ref.) Thus, chemokines, have a fundamental role not only in inflammation and immune surveillance but also in cancer progression.

CCL5, the chemokine that binds CCR5  is one of the very relevant chemokine in cancer progression, and is often detected in neoplastic tissues. Large amounts of CCL5 (that bind to CCR5 receptors) are produced by T cells present in the vicinity of tumors and it is known to be strongly associated with the tumor progression (Ref.). CCL5 plays an active role in recruiting a variety of leukocytes into inflammatory sites including T cells, macrophages, eosinophils and basophils.

Another relevant mechanism related to CCL5/CCR5 interaction is specifically connected to the Macrophages:

Macrophages derived from monocyte precursors undergo specific differentiation depending on the local tissue environment. They respond to environmental cues within tissues such as damaged cells, activated lymphocytes, or microbial products, to differentiate into distinct functional phenotypes. The M1 macrophage phenotype is characterized by the production of high levels of pro-inflammatory cytokines, an ability to mediate resistance to pathogens, strong microbicidal properties, high production of reactive nitrogen and oxygen intermediates, and promotion of Th1 responses. In contrast, M2 macrophages are characterized by their involvement in parasite control, tissue remodeling, immune regulation, tumor promotion and efficient phagocytic activity. (Ref.)

CCL5 is bound by the chemokine receptor CCR5, which is expressed on the surface of macrophages. Antagonist of CCL5 receptors is strongly associated with a shift of  macrophage subsets to a pro-inflammatory phenotype, i.e. a shift from M2 to M1 (Ref.). Therefore, blockage of CCR5 by maraviroc is expected to lead to the reprogramming of tumor-associated macrophages, which then destroy the cancer cells, rather than promoting tumor growth.

Indeed, this is what has been observed in the recent clinical trial from Heidleberg (Ref.).

The results suggest that monocyte/macrophage subsets differentially contribute to progression and resolution of tumors and that this balance can be successfully modulated by chemokine antagonists.

Note: another drug that may be used to modulate macrophages by inhibiting M2 is Plerixafor and has been discussed earlier on this website https://www.cancertreatmentsresearch.com/?p=265

The drug administrated in the clinical trial was Maraviroc at 300mg 2x/day https://clinicaltrials.gov/ct2/show/NCT01736813

However, with Ketokonazole it has to be taken at 150mg, 2x/day https://aidsinfo.nih.gov/drugs/408/maraviroc/0/professional

Safety and Side Effects:

According to the clinical trials before becoming an anti HIV drug, the most common side effects reported with twice-daily treatment were cough, pyrexia, upper respiratory tract infections, rash, and dizziness. The most common side effects reported with once-daily dosing were diarrhea, edema, influenza, esophageal candidiasis, sleep disorders, rhinitis, parasomnias, and urinary abnormalities. Nausea, diarrhea, fatigue, and headache were common in Phase 2b/3 trials. (Ref.) Maraviroc may also cause severe liver symptoms.

More about side effects can also be found here http://www.rxlist.com/selzentry-side-effects-drug-center.htm

In contrast to this long list of potential side effects, the Heidelberg trial did not encounter any major issue as suggested by this statement: “The data show that the HIV medication is very well-tolerated” (Ref.)

The immune response influences the clinical course of colorectal cancer (CRC). Analyzing the invasive margin of human CRC liver metastases, we identified a mechanism of immune cell exploitation by tumor cells. While two distinct subsets of myeloid cells induce an influx of T cells into the invasive margin via CXCL9/CXCL10, CCL5 is produced by these T cells and stimulates pro-tumoral effects via CCR5. CCR5 blockade in patient-derived functional in vitro organotypic culture models showed a macrophage repolarization with anti-tumoral effects. These anti-tumoral effects were then confirmed in a phase I trial with a CCR5 antagonist in patients with liver metastases of advanced refractory CRC. Mitigation of tumor-promoting inflammation within the tumor tissue and objective tumor responses in CRC were observed.

Anibamine, a Natural Product CCR5 Antagonist, as a Novel Lead for the Development of Anti Prostate Cancer Agents http://www.ncbi.nlm.nih.gov/pmc/articles/PMC2914538/

Until recently, inflammatory chemokines were viewed mainly as indispensable “gate keepers” of immunity and inflammation. However, updated research indicates that cancer cells subvert the normal chemokine system and these molecules and their receptors become important constituents of the tumor microenvironment with very different ways to exert tumor-promoting roles. The CCR5 and the CCL5 ligand have been detected in some hematological malignancies, lymphomas, and a great number of solid tumors, but extensive studies on the role of the CCL5/CCR axis were performed only in a limited number of cancers. This review summarizes updated information on the role of CCL5 and its receptor CCR5 in cancer cell proliferation, metastasis, and the formation of an immunosuppressive microenvironment and highlights the development of newer therapeutic strategies aimed to inhibit the binding of CCL5 to CCR5, to inhibit CCL5 secretion, or to inhibit the interactions among tumor cells and the microenvironment leading to CCL5 secretion.

The roles of the chemokine CCL5 and its receptor CCR5 in breast cancer progression remain unclear. Here, we conducted microarray analysis on 2,254 human breast cancer specimens and found increased expression of CCL5 and its receptor CCR5, but not CCR3, in the basal and HER-2 genetic subtypes. The subpopulation of human breast cancer cell lines found to express CCR5 displayed a functional response to CCL5. In addition, oncogene transformation induced CCR5 expression, and the subpopulation of cells that expressed functional CCR5 also displayed increased invasiveness. The CCR5 antagonists maraviroc or vicriviroc, developed to block CCR5 HIV coreceptor function, reduced in vitro invasion of basal breast cancer cells without affecting cell proliferation or viability, and maraviroc decreased pulmonary metastasis in a preclinical mouse model of breast cancer. Taken together, our findings provide evidence for the key role of CCL5/CCR5 in the invasiveness of basal breast cancer cells and suggest that CCR5 antagonists may be used as an adjuvant therapy to reduce the risk of metastasis in patients with the basal breast cancer subtype.

The systemic and organ-specific human fibrotic disorders collectively represent one of the most serious health problems world-wide causing a large proportion of the total world population mortality. The molecular pathways involved in their pathogenesis are complex and despite intensive investigations have not been fully elucidated. Whereas chronic inflammatory cell infiltration is universally present in fibrotic lesions, the central role of monocytes and macrophages as regulators of inflammation and fibrosis has only recently become apparent. However, the precise mechanisms involved in the contribution of monocytes/macrophages to the initiation, establishment, or progression of the fibrotic process remain largely unknown. Several monocyte and macrophage subpopulations have been identified, with certain phenotypes promoting inflammation whereas others display profibrotic effects. Given the unmet need for effective treatments for fibroproliferative diseases and the crucial regulatory role of monocyte/macrophage subpopulations in fibrogenesis, the development of therapeutic strategies that target specific monocyte/macrophage subpopulations has become increasingly attractive. We will provide here an overview of the current understanding of the role of monocyte/macrophage phenotype subpopulations in animal models of tissue fibrosis and in various systemic and organ-specific human fibrotic diseases. Furthermore, we will discuss recent approaches to the design of effective anti-fibrotic therapeutic interventions by targeting the phenotypic differences identified between the various monocyte and macrophage subpopulations.

70 thoughts on “Maraviroc: An anti-HIV Drug that Reactivates the Immune System to Fight Cancer”